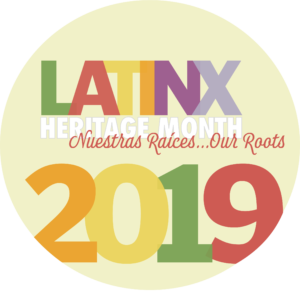 The Intercultural Center, along with the Organization of Latin American Students would like to invite you to observe this year’s Latinx Heritage Month (LHM).  Our 2019 theme is “Nuestras Raíces”, which translates to “our roots”. Given the current social and political climate, taking pride and giving tribute to our background is a matter that is continuously expanding. As we engage in reclaiming and redefining what being Latinx means to those who identify as such, we wish to highlight and commemorate the rich, diverse, and intersectional aspects of nuestras raíces.

September 16: My Shelf to Yours

This event allows individuals to select a hand wrapped book by a Latinx author. The carefully curated collection will feature a wide range of genres that are tagged with intriguing clues alluding to the book inside.

September 17: Life After Death: The Day of the Dead in Mexico

The MOA’s annual exhibit celebrates the unique Mexican observance of the Day of the Dead.  The exhibit’s centerpiece is a traditional ofrenda, an altar with food and beverage offerings, flowers, sugar skulls, and photos of deceased family members.  This year, the colorful exhibit compares the celebration’s observance in rural areas versus urban ones. It also includes information on the celebration’s history and its unique skeleton-themed folk art.  Exhibit text is in English and Spanish. Admission is free. Other dates include: September 18, 19, 20, 21 & 24

Sponsored by: Museum of Anthropology

Join the Harvest Table Culinary Group in the Pit for a “Pop Up” event featuring a dessert from the Latinx Diaspora. The culinary dish for the day will be a flan and tres leche cake.

Join the Office of Wellbeing, the Intercultural Center, and the Organization of Latin American Students as a part of Latinx Heritage Month in visually mapping out your ancestral roots. Paint a canvas displaying your family tree and/or ancestral roots to celebrate heritage and diverse cultural backgrounds. Open to all students, faculty, and staff!

Sponsored by: Office of Wellbeing, Organization of Latin American Students  and the Intercultural Center

Homecoming is just around the corner! We hope you will join the HOLAA Evening Reception as a part of your schedule while visiting Mother So Dear. The reception is open to alumni, families, faculty, staff and current students with a Latin American or Spanish speaking cultural heritage.

1.5 Hours Before Kickoff, Beside the Indoor Tennis Center

September 23: 25 Texans in the Land of Lincoln (Film Screening)

Filmmaker Ellen Brodsky, chronicles the quest of 25 mostly Mexican American history students as they travel by bus from the Alamo in Texas to the Illinois State Military Museum in Springfield to ask about the repatriation of General Santa Anna’s prosthetic leg. Dr. Joseph Soares, Chair of the Sociology Department will offer remarks and lead a discussion following the film.

September 23: Cine Mexico Now: This Is Not Berlin

1986. Mexico City. Best friends Carlos and Gera are struggling to survive their suburban middle-class existence until they discover the electrifying world of the Azteca, an underground nightclub overflowing with sex, drugs, and uninhibited excess. As they find their artistic voices and explore their sexuality, their friendship is tested as they descend further into the debaucherous scene.

September 24: Brown (or not) and Proud: Discussing The Implications of Ethnic Identity for Academic Performance

A positive correlation between ethnic identity and academic behaviors has been reported in the psychology and higher education literature. During this lunch-and-learn we’ll discuss ways in which a sense of Latinx identity can be nourished in the Wake Forest context.

“Just One Word” is a moderated dialogue that takes place over a lunch or dinner, during which participants share their understanding and experience of a specific word. By invitation only.

Join the Harvest Table Culinary Group in the Pit for a “Pop Up” event featuring a hors d’oeuvres from the Latinx Diaspora. The culinary dish for the day will be Beef Empanadas with pico and lime crema.

Kick back and enjoy your favorite throwback shows with FREE breakfast.

Come enjoy various cultures from around the world through creative displays and activities, a variety of foods, information about student organizations, and several performances!

OLAS and BSA will come together to host Soul Food Fiesta. We grow up eating the food of our cultures. It becomes a part of how we are. For many of us, food creates warm feelings and good memories, and it ties us to our families. This event showcases the intersectional relationships between Latinx and Black identities through food. Since food brings people together, we are making our own good memories and Wake Forest familia.

Queer Latinx Icons is a poster display that will be up in the Benson Rotunda from September 9 – October 4 in recognition of the intersection between Latinx Heritage Month and Queer History Month.

The Counseling Center will hold a conversation and provide resources about the following topics: Grit, Boundary setting, relationship building, and aligning our lives with our values. Staff will hold conversations around tools that may be important for students as they are acknowledging and honoring their rich roots and simultaneously growing into their own identities, values, and understanding of themselves.

Felipe is an undocumented Mexican immigrant at a crossroads: after 16 years in Brooklyn and sending the bulk of his earnings to his wife and children in Mexico, he’s decided to return home to the family he hasn’t seen in almost two decades. But when he informs them of his plans, he discovers that they’ve squandered the money, are deeply in debt and don’t want him to return. Shot over two years, this is a searing and intimate portrait of one undocumented worker on the margins. In allowing the rhythms, emotions, and sounds of Felipe’s day-to-day life to drive the story, Cordero and Croda open an impressionistic, cinematic window into one of the most pressing political issues of our time

This event is to build community amongst Latinx women on campus and is open to students, faculty, and staff. Attendees are welcome to drop in for as little or as long as they would like.  Lunch will be provided.

Join Student Union for Tuesday Trivia. The theme for this week will focus on Latinx History. Come out and join us!

October 3: Queer + Latinx: A Case Study featuring One Day at a Time

Part of our weekly C3: Building Community over Coffee and Conversation series, this week’s topic will discuss the intersection of experiences for people who identify as LGBTQ+ and Latinx. We will use Netflix’s hit show One Day at a Time for a case study to frame our conversation; no prior knowledge of LGBTQ+ experiences or the show is required. All are welcome.

Julissa Calderon is an Afro-Latinx actress, writer, and comedy producer/director from Miami. She recently completed a two-year talent residency at Buzzfeed’s Pero Like channel where her videos have garnered (conservatively) roughly 100 million views across digital platforms. She recently appeared on the AwesomenessTV/FUSE series, WTF BARON DAVIS. Prior to that, she appeared in ABC’s REVENGE and starred in the ABC Diversity Showcase.  She also just wrapped an eight-episode recurring arc on the upcoming MACRO / America Ferrera / Netflix series, GENTEFIED that’s due out Q1 2020.

First Fridays is a monthly event that provides a safe space for students to connect through dialogue, free food and fellowship. Stop by the Intercultural Center to immerse in the experience!

October 5: Fiesta on the Quad

Join OLAS for Fiesta on the Quad where we will recognize the generations of Latinx Americans who positively influenced and enriched our nation and society. We will celebrate Latinx arts, culture, and cuisine, and language. This event will showcase the similarities of the region while also recognizing their differences. As guest walk through Manchester Plaza, they will be transported to Latin America. People will be dancing to the sound of cumbia, bachata, salsa, and samba. We will provide a large selection of food, so people have a taste of Latin America. Fiesta on the Quad fosters community as individuals engage with people outside their social circle.

October 7: Cine Mexico Now: The Phantom of the Monastery

One of the first Mexican horror films, this pioneering work by filmmaker Fernando de Fuentes is a wonderfully macabre gothic masterpiece.

This documentary is about a DACA recipient here at Wake Forest who is a cheerleader and student leader.

Dr. Diego Burgos will present the ACORDEVS (Amplio Corpus del Vallenato Tradicional) project. This project promotes the study and exploration of traditional vallenato music among the new generations of songwriters, singers, and musicians through an online platform.

Sponsored by: Department of Spanish & Italian and Colombian Ministry of Culture

Join the Harvest Table Culinary Group in the Pit for a “Pop Up” event featuring the International Grill with food from the Latinx Diaspora. The culinary dish for the day will be Pernil (roasted pork shoulder) Spanish rice and beans, sweet plantains and ceviche bar.

Find us on campus map